The Albums of 1982: The Dream Syndicate: The Days of Wine and Roses 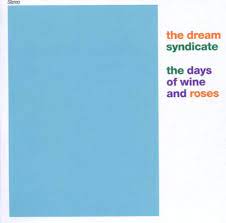 Track List: Tell Me When It's Over; Definitely Clean; That's What You Always Say; Then She Remembers; Halloween; When You Smile; Until Lately; Too Little, Too Late; The Days of Wine and Roses
The Days of Wine and Roses was the debut LP by the L.A. based band The Dream Syndicate, a seminal record of the Paisley Underground sound generally associated the early 1980s and centered on the West Coast. Incorporating a multitude of influences from the 1960s, the style also drew upon Punk and New Wave. The debut record is melodic with fuzzy guitars and Steve Wynn's versatile vocal style.
"Tell Me When It's Over" set the album's tone with its melodic guitars reminiscent of The Beatles Revolver record, but still danceable. Wynn's weary deliveries create a sense both angst and ease. "Definitely Clean" is more punk in tone, with the angst rising a bit. The moodiness continues on "That's What You Always Say", Wynn laments "you know how the moods change all the time" after numerous attempts to connect with subject of the song. Once again the onslaught of melodic guitars sustains the track. "Then She Remembers What She Said" recounts a physically abusive relationship with a sense of both anger and irony.
"Halloween" is the centerpiece of the record, setting an irresistible atmosphere of abandon and menace, both minimal and surreal. I saw The Dream Syndicate perform live in 2017 and seeing "Halloween" played live - it took the show to another level.
The Velvet Underground influenced "When You Smile," features the hypnotic refrain "It seems like the end of the world, When You Smile." The manically gleeful "Until Lately" satirizes the nascent yuppy culture taking hold in America, adding in some harmonica for a bluesy vibe. Kendra Smith takes over vocals on the quietly effective "Too Little, Too Late" The album closes with "The Days of Wine and Roses," a fuzzy jam filled with reverb about an onlooker witnessing a girl drawing a crowd by standing on a ledge while he tries to recall "the days of wine and roses."
An album worth repeated spins, The Days of Wine and Roses invites the listener to get lost in its sonically pleasing landscapes and sardonic observations.
at December 04, 2021 No comments: