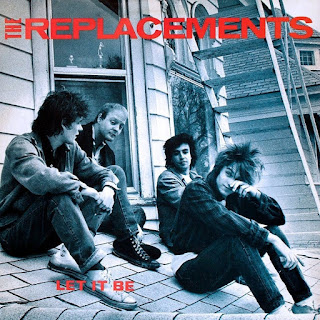 Side 1: I Will Dare; Favorite Thing; We're Comin' Out"; Tommy Got His Tonsils Out; Androgynous; Black Diamond

Side 2: Unsatisfied; Seen Your Video; Gary's Got A Boner; Sixteen Blue; Answering Machine

For their third LP the quartet from Minneapolis copped a Beatles album title for the hell of it. Nevertheless, they recorded a selection of songs worthy of the title, one of the best rock albums of the 1980s in fact. The album cover says all one needs to know about The Replacements: Bluish gray, Midwest, sitting on a roof and no doubt plotting some fatal strategies to beat back the boredom.

"I Will Dare" is a come on song that begins the record on a playful note, "How young are you/ How old Am I/ Let me count the rings around my eyes," with some great guitar work. "Favorite Thing" speaks to a low rent rock and roll lifestyle that's preferable to most others, a pure Replacements song with a post-punk sensibility. "We're Comin' Out" may allude to the chaos of their live shows, notorious for being alcohol fueled wildly erratic. "Tommy Got His Tonsils Out" is a novelty song about doctor trying to cram in an operation so he get a round of golf in, based on Tommy actually getting his tonsils removed.

Paul Westerberg wrote "Androgynous" for Frank Sinatra, that's no joke. The tune sounds like a drunken ballad played at a dive bar around 4am. It's also one of the more progressive songs of the decade when classical gender norms were being enforced by mass culture. The song imagines Dick and Jane, a couple with ambiguous genders who love each other. If anyone's got a problem with it they should take a hike. A cover of "Black DIamond", a classic Kiss song, ends side one on a heavier, darker tone.

The masterful "Unsatisfied" opens side two, an epic statement on dashed expectations, being young, bored, and melancholy. A sentiment expressed eloquently by Westerberg's vocal. "Seen Your Video" takes aim at MTV and what passed for mainstream music in the 80s. The "Mats" were always caught between their we don't give a shit punk attitude and striving for big time success in the form of record sales and mass airplay. When they opened for Tom Petty and the Heartbreakers on a 1989 stadium tour their style never took with the MTV/FM rock crowd. The throwaway "Gary's Got A Boner" is there just because, Gary being a recurring figure of ridicule in the Mats universe.

"Sixteen Blue" was written for Tommy, Westerberg sympathized with his youth and how strange and confusing the world looks when you're 16. The song builds and builds, culminating with mournful, beautiful guitar solo by Bob Stinson. "Answering Machine" appropriately ends the record on a note of angst and frustration abetted by technology.

Let it Be ironically plays like a Beatles album with its jarring shifts in tone and youthful spirit with a chip on their shoulder. They're charming, but also abrasive. And that's fine. "Unsatisfied" or "Sixteen Blue" could've been hits, but they were too real for 1984.