The Beatles (The White Album) 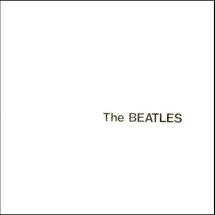 
Side 1: Back in the U.S.S.R.: Dear Prudence: Glass Onion: Ob-La-Di, Ob-La-Da: Wild Honey Pie: The Continuing Story of Bungalow Bill: While My Guitar Gently Weeps: Happiness is a Warm Gun

Side 2: Martha My Dear: I'm So Tired: Blackbird: Piggies: Rocky Raccoon: Don't Pass Me By: Why Don't We Do It in the Road: I Will: Julia

Side 3: Birthday: Yer Blues: Mother Nature's Son: Everybody's Got Something to Hide Except for Me and My Monkey: Sexy Sadie: Helter Skelter: Long, Long, Long

If Sgt. Pepper's Lonely Hearts Club Band marked the pinnacle of popular music during the 1960s, The Beatles recorded over the summer/autumn of 1968 serves as a cultural marker, traversing between the light and the darkness of the decade (and what was to come.) The mysterious white cover hinted at the abstract nature of the album ranging in genres, mood, and style.

Detractors of the record sort of have a point, the argument being it would've worked better as a single record and that track for track it holds no candle to the previous albums. But let's be honest,  the White Album launched a thousand ships, an unstoppable freight train of imagery and melody. Insular yet inviting, the record serves as a wondrous and sometimes eerie look into the minds of The Beatles.

The variety of songs spoke to the different directions they were going as individuals. Lennon moved further towards searing personal expressions of memory and angst. Always the most open to writing about himself from early songs like "I Don't Want to Spoil the Party" and "Help," to brutal self-examination on "Yer Blues and "I'm So Tired." McCartney would prove himself to be the chameleon, using the studio as a playground for various styles. Harrison's four contributions, especially "While My Guitar Gently Weeps," put him on a level with Lennon/McCartney. Ringo is the constant throughout, although he's not drumming on all the tracks, his distinct style keeps the chaos together.

There's a myriad number of ways to approach the record, one's as a dialogue between John and Paul. With McCartney being the main influence on Sgt. Pepper and Magical Mystery Tour, Lennon would assert himself here. His contributions to the record not only equaled McCartney's, but revealed a new undercurrent to his songwriting, honest, surreal, playful. There's a restlessness to Paul's songs as well, a conflict between his more conventional and Avant Garde sensibilities.

"Back in the U.S.S.R." opened the album appropriately as a sort of meta statement. Mimicking the opening of Sgt. Pepper, the song parodies The Beach Boys and Cold War politics. "Dear Prudence" by John was inspired by India, pop psychedelia evolving into a bliss out of transcendence. John pokes fun at Paul and himself on "Glass Onion" with John referencing past Beatles songs including "Fixing a Hole" and "I am the Walrus."

Paul's "Ob-La-Di, Ob-La-Da" famously annoyed his band mates, but he persisted in his affinity for the occasional novelty song. The lyrics tell the story of Desmond and Molly and became a hit single in Europe and Japan. "Wild Honey Pie" is the fragment of a chant concocted by McCartney. John invited Yoko to join him on background lyrics on "Bungalow Bill" in a story song told with his familiar sardonic edge.

Side one ends with two standouts with Harrison's "While My Guitar Gently Weeps" and Lennon's "Happiness is a Warm Gun" each taking the album in a more serious direction. Eric Clapton played lead guitar on "Gently Weeps" in one of the heaviest songs ever recorded by The Beatles. Similar in theme to "Within You, Without You" but more despairing. Lennon put together three songs and made "Happiness is a Warm Gun" into a marvelous production of dark, surreal imagery culminating into a wonderful harmony anticipating Queen by a few years.

The second side would feature shorter songs, a collection of asides and alternating moods. "Martha My Dear" and "I'm So Tired" contrast each other well. Paul writes a cheerful ditty about his sheepdog Martha set to piano and horns. John wrote a song about insomnia, expressing his agonized state of mind at the time, and Paul's background vocals contribute an added edge.

Next follows the "animal" sequence of tracks "Blackbird", "Piggies," and "Rocky Raccoon." Paul's metaphorical "Blackbird" and George's Orwellian "Piggies" provided further juxtapositions. "Rocky Raccoon" is a pastiche of a country western ballad, with Paul acting as the narrator.

Ringo wrote the rickety "Don't Pass Me By", punctuated by George's fiddle playing. Paul's bluesy, but under produced, "Why Don't We Do It On the Road," and the soft balladry of "I Will" continued his chameleon streak. "Julia" by Lennon is one of his tenderest songs and the only Beatles track he recorded by himself.

The second disc is heavier and even more experimental. "Birthday" is a traditional rocker but becomes more sonic as it progresses foreshadowing what's to come. Lennon's "Yer Blues" is lacerating and claustrophobic, a foreshadowing of grunge. Paul's "Mother Nature's Son" returns us to another pastoral setting, John wrote a similar song "Child of Nature" that never went beyond the demo stage (later reworked as "Jealous Guy"). John's surreal rocker "Everybody's Got Something to Hide Except for Me and My Monkey" exclaims the "deeper you go, the higher you fly - so COME ON!" The equally compelling "Sexy Sadie" offers another one of John's dream like settings serving as an allegory/satire of the messianic voices who arose during the 1960s.

"Helter Skelter" continues to carry a level of ominous undertones because of the Manson case, but it persists as a snapshot of the band at their most unhinged. A garage band assault of guitars continued the more experimental bent of the record, lyrics mean less and less and are dwarfed by the sound. Harrison's "Long, Long, Long" is a favorite of mine and precursor to All Things Must Pass and the Merseybeat piano echoing "Go Now" by The Moody Blues.

"Revolution 1" was the band's almost obligatory statement on the events of 1968. Lennon's non-committal on the youth revolution pleased few, but would be consistent with his personal philosophy: change yourself before trying to save the world.

Paul's nostalgic period piece "Honey Pie" follows "Revolution" in jest. "Savoy Truffle" features George's icy wit backed by a horn section. John's
Cry Baby Cry" is another highlight with its vivid imagery of a dream like world in power pop splendor.  The hidden track by Paul "Can You Take Me Back" serves as a haunting prologue to "Revolution 9."

The sound collage of "Revolution 9" may be less revolutionary today, but any true fan of the record shall never skip it. Lennon allegedly said it was the music of the future and he may have been right. "Goodnight" sends all listeners home with an appropriate lullaby also written by Lennon.

As Ringo said in The Beatles Anthology, "there's a lot information on a double album." Now over 50 years later the album survives on its wealth of content and variety. It is the narrative of the Beatles coming apart, but it is still a Beatles record. They were obviously going their own way, but still capable of amazing collaboration. It will continue to inspire.

Email ThisBlogThis!Share to TwitterShare to FacebookShare to Pinterest
Labels: The Beatles, White Album