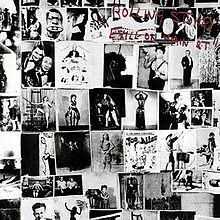 Side Two: Sweet Virginia; Torn and Frayed; Sweet Black Angel; Loving Cup
Side Three: Happy; Turd on the Run; Ventilator Blues; I Just Want to See His Face; Let it Loose
Side Four: All Down the Line; Stop Breaking Down; Shine a Light; Soul Survivor
Recorded over a three year period in shifting locales including London, Paris (living as tax exiles), to L.A. Exile on Main Street has earned a reputation as the THE STONES album. One explanation for its legendary status could be that it marked the end of an era for the Stones and rock music. The changing musical landscape of the 1970s would allow for a multitude of varying reactions and counter-reactions to the 1960s, staging the cultural divides of the coming decades. Exile on Main Street stands as en enticing marker that's not yet frozen in amber, but suffused with an everlasting vibrancy.
The album gets off to a rousing start with "Rocks Off", setting the tone for the album's themes: decadence, desire, ennui, exhaustion, and desperation. "Rip This Joint" and "Shake Your Hips" both get to the misty origins of rock and roll. "Casino Boogie" is a call back to the band's R&B roots. "Tumbling Dice" is a signature song on the record with memorable riffs and melodic background vocals. "Sweet Virginia" is drenched in blues and gospel with a memorable chorus - used to great effect in Rian Johnson's 2019 film Knives Out. "Torn and Frayed" was inspired by the country rock of Gram Parsons. "Sweet Black Angel" is a stealth political song, inspired by activist Angela Davis. Jagger's slurred hillbilly lyrics masking its commentary on racial justice. The first disc ends with the soulful balladry of "Loving Cup," not unlike what The Faces were doing at the time. Like any great Stones it builds to a splendid crescendo with a horn section and barrel house piano.
Keith Richards memorably took over on lead vocals with "Happy", a hypnotic rocker. "Turd on the Run," "Ventilator Blues," and "I Just Want to See His Face" form something of a suite and evoke the heady atmosphere from which the album sprang. "Let it Loose" and "All Down the Line" fit more into the classical Stones song category, great rock and roll that would be imitated over and over again."Stop Breaking Down" was written by blues legend Robert Johnson featuring the Stones doing their best to channel the blues. "Shine a Light" and "Soul Survivor" are a welcome one-two punch to end Exile on Main Street, leaving one with the sense of coming through a soul draining ordeal, maybe not yet redeemed, but still alive.
at June 12, 2020

Release Date: September 28, 1976 Produced by Stevie Wonder Side One: Love's in Need of Love Today; Have a Talk With God; Village Ghe... 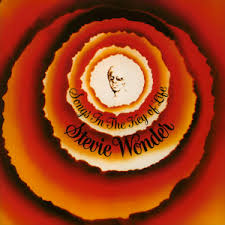