The Albums of 1971: Uriah Heep: Look At Yourself 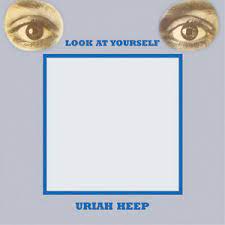 Track List: Look At Yourself; I Wanna Be Free; July Morning; Tears in My Eyes; Shadows of Grief; What Should Be Done; Love Machine
Uriah Heep's second release of 1971, Look At Yourself is heavy on the keyboards, I wonder if Christopher Walken was in the studio calling for more keyboards? Not only are the song titles sophomoric, the lyrics are equally inane. Opening track "Look At Yourself" is nonsensical and headache inducing. "I Wanna Be Free" is strictly Spinal Trap territory, "bring a silver horse to carry me away" indeed. "July Morning" goes on way too long and is unwieldy (the song led to a July 1 national holiday in Bulgaria.) "Tears in My Eyes" aspires to be a rocker but never clears orbit. "Shadows of Grief" is over eight minutes, the musical equivalent of a jumbo order of nachos you would get at a Speedway at 1:30 in the AM on a Tuesday. "What Should Be Done" is a bright spot on the record, the studio theatrics being taken down a few notches. And the unfortunately titled "Love Machine" is about as soulful as the HAL 9000 crooning in 2001: A Space Odyssey.
at June 22, 2021