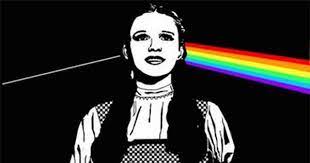 The practice of synching rock albums with movies came to popular attention when fans started playing Pink Floyd's Dark Side of the Moon with The Wizard of Oz. They noted the uncanny connections between the lyrics on the album with what's going in the film. Over the years there's been a small community seeking out the perfect synch - there's websites. It's been pointed out by many that putting any piece music against any visual media and they will start to synch. There's something mysterious about it. Recently, I experimented a little on my own. An important approach is to find an album and a film with similar themes. So play any Radiohead or Pink Floyd album against a dystopian Sci-Fi and you'll start to see connections. Ideally, the synch will reveal multiple layers of meaning within the film and the music. Here are some of the ones I tried. 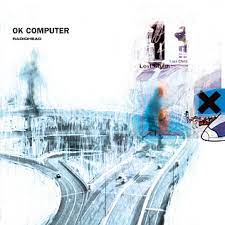 (12 Monkeys - Radiohead: Ok Computer) - Terry Gilliam's 1995 dystopia dealing with time travel, deadly viruses, secret societies, and madness may be his best film. Bruce Willis stars as a confused and weary man sent back from the future to stop a deadly plague from decimating humanity. Radiohead released Ok Computer in 1997, one of the epochal albums of the decade. Thom Yorke's lyrics are filled with apocalyptical imagery and rock/electronica music mimicking how a machine might compose music goes along quite well with the film. Bruce Willis wondering through a desolate landscape as "Exit Music (for a film)" plays captures the wide eyed melancholy of the movie.

(The Matrix - Radiohead: Kid A) There are many albums to play alongside The Matrix, ranging from heavy metal to prog rock. Radiohead's Kid A perfectly synchs with Neo, Morpheus, and Trinity, the first line of the film "Is Everything in Place" practically introduces the opening track "Everything In It's Right Place." Placing together two important pieces of art at the dawn of the Millennium hits all the right notes as they move between themes of despair and personal liberation.

(American Graffiti - Paul McCartney and Wings: Red Rose Speedway) A perfect synch. Paul McCartney's retro 1973 album is romantic and nostalgic, going for the energy of the early Beatles records and the epic sounding latter day Fab Four. Tracks like "Get on the Right Thing "and "When the Night" are ideal with the neon/nighttime energy of the film. Even Paul's maligned hit single "My Love" works well.

(Three Days of the Condor - The Alan Parson Project: Eye in the Sky) - Maybe the most enlightening synch, adding much to the experience of the album and the film with paranoia and surveillance being at the center of both works. "Sirius" is often used by sports teams to pump up the crowd before a game, here as the opening credits roll it has the feel of encroaching doom. Condor plays less as a post-Watergate paranoid thriller and more as a European art film with a Sci-Fi bent when played with Eye in the Sky, especially in the scenes between Robert Redford and Faye Dunaway.

(The Shining - The Beatles: The White Album) - My own concoction, an attempt mash up Kubrick with the Beatles, there's a slight historical connection. Kubrick made his home outside of London while the Beatles were in their heyday, they even approached him about directing their adaptation of Lord of the Rings that never went beyond the talking stage. So, the Beatles with Kubrick makes for a funky concoction. As the iconic opening credits roll, McCartney sings about about "snow peaked mountains way down south" on "Back in the USSR," while "Dear Prudence" takes on a more menacing tone as Jack enters the Overlook. John's satiric "Glass Onion" plays during the interview scene. The synch makes both works stranger and even more mysterious.

To sum up, synching albums with movies is fun and makes you see both from a new angle. Perhaps our brains are designed to find patterns, the synch approach to media helps us become aware of how our minds work. 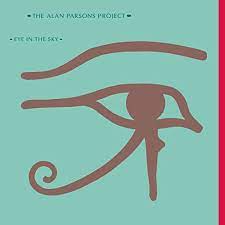