The Albums of 1973: George Harrison: Living in the Material World 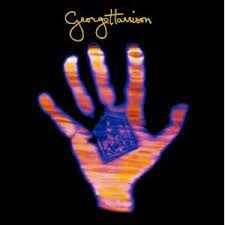 Produced by George Harrison (with Phil Spector on "Try Some, Buy Some")

Side One: Give Me Love (Give Me Peace on Earth); Sue Me, Sue You Blues; The Light That Has Lighted the World; Don't Let Me Wait Too Long; Living in the Material World

Side Two: The Lord Loves the One (That Loves the Lord); Be Here Now; Try Some, Buy Some; The Day the World Gets 'Round; That is All

The follow up to George Harrison's epic post-Beatles release All Things Must Pass, Living in the Material World continued to explore spiritual themes.

"Give Me Love (Give Me Peace on Earth)" became an international hit and a standard in Harrison's personal canon. Similar to John Lennon and Yoko Ono's eloquent pleas for peace in songs like "Give Peace a Chance," but directed at the divine in examining existential issues of birth and death, and also a harbinger of the toned down production of the record with its quiet pianos and guitars.

Harrison employs his icy wit on "Sue Me, Sue You," a response to the legalistic chaos in the aftermath of The Beatles breakup. Legendary session man Nicky Hopkins provides melodic piano on "The Light That Has Lighted the World." The song laments people who are "hateful of anyone that's happy or free" because of a refusal to see outside themselves.

"Don't Let Me Wait Too Long" is more of a straightforward love song with more of a pop sound, the chorus echoes a song Harrison wrote with the Beatles, "Blue Jay Way." "Who Can See It" is more lavishly produced, a confessional of sorts.

The album's central piece "Living in the Material World" is both playful and serious. Cynics may view it as trite musings from a rich rock star, but there's a self-awareness that takes the edge off. Harrison contrasts the conflicting plains of the material and spiritual in the music and lyrics. Former bandmates John, Paul, and "Richie" are referenced and how they "all got caught up in the material world." Harrison wrote of having his body used up like a car and "being worn out." Interludes in the track recall "Within You, Without You" to further communicate the difference between worldly pop and spiritual music.

"The Lord Loves the One (That Loves the Lord)" could be considered preachy, but the lyrics simply point out those who believe they own the world (billionaires) are in a spiritual death spiral, very much in keeping Harrison's prior catalog, and heavily influenced by the Bhagavad Gita (which I still need to read).

"Be Here Now" is direct in its messaging of being in the present, a sitar drone with an organ creates a solemn atmosphere. "Try Some, Buy Some" was covered by Ronnie Spector in a much better version vocally, there's an air of mystery in the lyrics built on metaphor, the orchestration is majestic.

"The Day the World Gets 'Round" takes the personal themes of the record and applies them to the wider world in a vision of a hopeful future, while the closing track "That is All" is more in the vein of All Things Must Pass with its muscular production.

Living in the Material World lends itself to repeated listening, the subtleties of the production come through. If there's a criticism, it's the monolithic nature of the sound and themes, but it's a compelling glimpse into Harrison's headspace in 1973. A continuation of ideas and sounds explored on the Beatles records - and an intriguing sequel to All Things Must Pass.

Email ThisBlogThis!Share to TwitterShare to FacebookShare to Pinterest
Labels: 1973, All Things Must Pass, Beatles, George Harrison