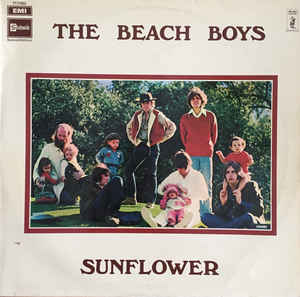 Sunflower concludes with Brian's "Cool Cool Water," a song intended for the Smiley Smile album. The longest track on the album at five minutes,it moves along like a spaced out reflection at the end of a long peaceful day in the sunshine. That sentiment sums up Sunflower well enough, it's a spirited mature album from The Beach Boys deserving of a wider audience.
at March 30, 2020 No comments: 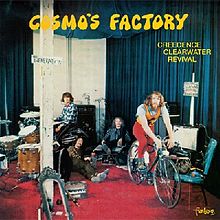 Side 1: Ramble Tamble; Before You Accuse Me; Travelin' Band; Ooby Doby; Lookin' Out My Backdoor; Run Through the Jungle

Side 2: Up Around the Bend; My Baby Left Me; Who'll Stop the Rain; I Heard it Through the Grapevine; Long As I Can See the Light

From 1968-70, Creedence Clearwater Revivial were on a serious roll! Releasing five albums within a two year period with a slew of hit singles, they oddly never achieved a number one hit, but they reached #2 five times, a standing record to this day. In an era with a multitude of tremendous artists doing their best work, CCR was right in the thick of it. Cosmo's Factory captured CCR at the height of their powers with five hit singles and one of the top selling records of 1970.

CCR had a range and it's on full display in Cosmo's Factory. "Ramble Tamble" opens the record with a seven minute epic of swamp rock and psychedelia. "Before You Accuse Me" is a Bo Didley cover, showcased the band's R&B influence, present on all their records. "Travelin" Band" was a number two single, a direct homage to Little Richard about chaotic life on the road during the era. "Ooby Dooby" goes into rockabilly territory, providing a nod to the pre rock era. "Lookin" Out My Back Door" is straight up country with surreal lyrics by Fogerty. It's hard to to hear "Run Through the Jungle" and not think of Vietnam movies (required they use this song?). I view it as a haunting barometer of how white working class kids felt about the war.

Side two beings with the familiar riff of "Up Around the Bend", a heavier version of "Proud Mary." "My Baby Left Me," an Arthur Crudup R&B cover is short and sweet. The anthemic "Who'll Stop the Rain" was inspired by the band's appearance at Woodstock, instantly conjuring images from the era. "I Heard it through the Grapevine" offered an extended jam of a Motown hit, running for eleven minutes I wonder if it impressed The Grateful Band, their fellow jam band in the Bay area! Ending with the soulful number "Long As I Can See the Light" - Cosmo's Factory ends on an uplifting note.

Unfortunately CCR would record only two more albums. Tom Fogerty left the band in 1971, and the magic was mostly absent on their final LP Mardi Gras. John would get involved in a legal battle with Fantasy Records, losing the rights to the music he had written, performed, and produced. During the 80s he began a successful solo career.

Trends have come and gone, but CCR and their music endures. They sounded unlike anyone else, four guys from the Bay Area who sounded like they were from the bayou of Louisiana, never hip (as the album cover suggests) but Right On in the best sense of the term.
at March 15, 2020 1 comment: