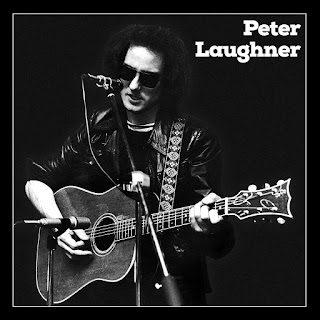 In 2019 SmogVeil Records released a 5 disc set in vinyl (also available in CD and streaming) of Peter Laughner's recordings. Laughner (1952-1977) was a key figure of the Cleveland music scene during the 1970s, playing in numerous bands including the legendary Rocket from the Tombs. Although Laughner never recorded a proper album, he left an indelible mark on the era.

Laughner (pronounced LOCK-NER) remains a something of a cult figure. Fans of Wilco will know Jeff Tweedy lifted his chorus for "Misunderstood" from Laughner's own rock and roll epic "Amphetamine." Laughner's presence also haunts The Cultural Dictionary of Punk by Nicholas Rombes, one of the best books on the era.  Determined to be the next Lou Reed, Laughner wrote rock criticism for Creem Magazine and started several bands, a few of which went on to long careers, most notably Pere Ubu.

This five disc retrospective provides a panorama of Laughner's music consisting mostly of live recordings. As a performer Laughner was self-effacing and displayed a range of styles. The mid-1970s music scene in Cleveland as a forerunner to punk. Bands like The Electric Eels and Rocket from the Tombs, created a nihilistic sound forged inside basement clubs embracing an age of decline and diminished expectations, a sound The Sex Pistols would popularize on their earthshaking 1976 album Never Mind the Bollocks.

The first disc, Fat City Jive, features Laughner performing for local radio stations around Cleveland in September and November of 1972 with his band The Wolverines. These sets are mostly country and folk. Bob Dylan and Lou Reed covers are also interspersed throughout, including spirited renditions of Dylan's "Please Mrs. Henry" and "Love Minus Zero (No Limit)." Terry Hartman's sad and soulful "Drunkard's Lament" is also on the disc. Thomas Pynchon fans will be pleased to hear Laughner praise the novel V and the haunting song he performs from the book, "The Eyes of a New York Woman."

Disc 2, One of the Boys features live performances from 1974-75 throughout Northeast Ohio.  Consisting mostly of Velvet Underground covers including "Rock and Roll,"Heroin," and "White Light/White Heat." There's also "One of the Boys" by Mott the Hoople and "All Along the Watchtower" from Bob Dylan, which Laughner introduced by saying, "here's an apocalyptic vision for your Saturday night." These performances are sonic, almost operatic, somewhere between The Who and and what would become known as Punk.

Disc 3, Pledging My Time, features a collection of acoustic home recordings, mostly written by Laughner. The lyrics are poetic, clearly influenced by Dylan and Lou Reed. "Baudelaire" is reminiscent of Dylan's "Visions of Johanna", "Down at the Bar" could be a Velvet Underground song. Robert Johnson's "32-20 Blues" appears with the introduction, "it's a really phallic song." Also included are the tender ballads "Sylvia Plath," "(My sister sold her heart to) the Junkman," and the melancholy Cleveland themed "Rain on the City."
The fourth disc Rock it Down features additional live cuts. "Ain't it Fun" was written by Laughner and Gene O'Conner for Rocket in the Tombs, later recorded by the Dead Boys. The version here is more rooted in the Blues, Jimi Hendrix, and The Doors than what would become punk. "Amphetamine" from the "Ann Arbor Tapes" is toned down from the versions floating around youtube over the years, but it's a striking rock epic, in Peter's words, "a song about the place where the river catches on fire."
The fifth disc Nocturnal Digressions features the final recordings of Laughner, performed the night before he died in his bedroom. As accounts of Laughner from his former wife Charlotte Pressler and friend Lester Bangs attest, his refusal to stop drinking alcohol destroyed his health (he died from Pancreatitis). So these recordings are especially tragic and intimate, off the cuff and buoyant including "Slim Slow Slider," "Blank Generation," and "Pale Blue Eyes." "See No Evil," another Television song, is unforgettable.
The "what if" questions for Laughner are tempting to consider, but mere speculation. A few years younger than Bruce Springsteen, both started out as regional figures and shared a belief in the transcendent power of rock and roll, but not in the macho or spaced out spiritual sense. It was in the music's power to evolve and provide personal liberation, a new poetry. These recordings trace the evolution of an artist with a truncated trajectory embedded with the spirit of a specific time and place.
at May 31, 2020