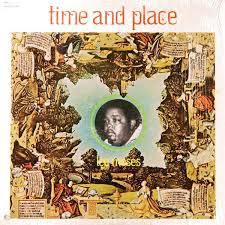 Now considered one of the finest soul LP's of the 1970s, Time and Place would be the only album Lee Moses (1941-1998) ever recorded. A fixture of the Atlantic music scene and later a session musician in New York City during the mid 1960s, Moses was a peer of Jimi Hendrix and many noted similarities in their guitar playing styles. Moses also had a distinct vocal style comparable Otis Redding and Wilson Pickett that's also on display throughout Time and Place.

The record gets off to a fantastic start with "Time and Place" featuring a melodic bass line and horns. Pioneering funk band The Ohio Players from Dayton appear on many of the tracks with Moses's own band The Disciples. "Got That Will" name drops many of the famous soul bands of the day from Sly and the Family Stone to The Allman Brothers, with Moses promising to join their ranks. "What You Don't Want Me to Be" is soulful and psychedelic with Moses delivering an impassioned performance. Next is a version of "California Dreaming" by The Mamas and the Papas, slowed down into a wearier and haunting interpretation. "Every Boy and Girl" is a quiet ballad of loss.

A cover of Hendrix's "Hey Joe" slows the heavy rock of the original version into a groove that gradually builds. "Free at Last" pays homage to Martin Luther King and reflects on the Civil Rights Movement with a subtle mournful tone. "Would You Give Up Everything" and "Adorable One" both address love and sacrifice, the closing track is especially poignant with an epic vibe of longing and things coming to an end.

Despite its high quality Time and Place failed to gain traction. By the mid-1970s Moses had left the music business, although it was believed he would sometimes make appearances at clubs around Atlanta. Information remains scant on Moses's later life, but the common word most attributed to his music and life is enigmatic. Time and Place become a highly sought after cult album for collectors, but was finally reissued in 2016, while in 2019 a more fuller collection of his recordings, mostly consisting of singles and B-sides, was released appropriately titled How Long Must I Wait.