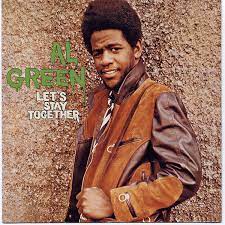 Side One: Let's Stay Together; La-la For You; So You're Leaving; What is This Feeling; Old Time Lovin'

Side Two: I've Never Found a Girl (who loves me like you do); How Can You Mend a Broken Heart; Judy; It Ain't No Fun To Me

The Reverend Al Green's fourth LP Let's Stay Together produced one of the biggest soul hits of the 1970s "Let's Stay Together", a number one single on the America charts, a standard in the purest sense. The additional eight tracks on the album are textured with Green's crystalized vocals and a sturdy horn section.

"Let's Stay Together" is the timeless recording that opens the record, a song of devotion and perseverance. "La-la For You" power lies in its understatement in the vocal and the production, precision piano chords and a subtle percussion defying gravity. "So You're Leaving" brings unease and moodiness in contrast to the previous two tracks. The intense, but spare, production is especially prevalent on "What is this feeling?" The intense but steady groove on "Old Time Lovin' brings side one to a close.

Side two opens with the upbeat "I've Never Found a Girl." The longest track at over six minutes is a meditative version the Bee Gees hit "How Can You Mend a Broken Heart." Green's quiet vocal is resilient, the narrative evolves in Green's vocals that tell their own story. "Judy" celebrates a new love, while "It Ain't No Fun to Me" is a breakup song ending the record on an uneasy note.

An album for all seasons and moods due to the depth of human emotion it draws upon, Let's Stay Together has aged with grace.